The newly built Heartlake City is facing a problem – They are lacking in produce and other food sources, and their city doesn’t have the money to start a farm.

When kidizens build their cities, consideration for others is embedded within every stage of the process. After the initial planning and building stages, issues begin to arise that require the kidizens to access empathy in order to assess others’ needs and move forward.

The newly built Heartlake City is facing a problem – They are lacking in produce and other food sources, and their city doesn’t have the money to start a farm. Luckily, their neighboring city, Lego Mountain, has an abundance of farmland. But why would Lego Mountain be interested in helping Heartlake City? The interaction that follows requires that the Kidizens exercise an incredibly important skill: empathy.

Although empathy is often thought of as innate, at Kidizens, we believe it is a multi-faceted, important real-life skill that must be developed , At Kidizens Best LEGO Summer Camps, children develop empathy in many ways – by working together, seeing other points of view, through observation and practice.

Alex works with the kidizens to help them realize the interdependencies amongst their cities. “It’s this web of helping each other and thinking about each other and that’s how it works. If one of the strands of the web is broken, it won’t work.”

Exercising Empathy
Modeling situations in which kids must consider how others are feeling gives them a chance to develop the empathic process of “perspective-taking”. “Perspective-taking” describes the ability to put oneself in the mind of another being and imagine what they may be thinking or feeling. In the case of Heartlake City, the students in charge of Lego Mountain must think about how their neighboring citizens feel about their lack of food source. After carefully considering this, Lego Mountain decides to help Heartlake City, and a fair trade agreement between the cities is made.

Rewarding compassion and empathy
Kidizens’ overall culture of compassion and empathy explicitly rewards kids who go out of their way to help others. In this environment, the personal connections between the kidizens thrive – a stranger quickly becomes a neighbor or a project partner, and another stranger turns into a longer-term business partner while planning and launching a LEGO business together. Empathy plays a big part in forming these kinds of relationships. Within these empathetic connections being formed and cemented by everyday collaborative problem solving and surviving, we find the underpinnings of successful community building.

Working towards a bigger goal
Each kidizen comes to realize they are a part of something bigger than just themselves. The overarching goal of creating ‘the most successful city’ leads to building empathy in every kidizen working towards that goal. Even in difficult competitive situations, they rejoice with others whether they win or lose, and the feeling of competition often overshadowed by achievement of the higher goals at hand.

A day at Kidizens involves multiple group decision-making situations. Everyone votes on important issues, allowing each of the kidizens to feel valued, because their vote and voice are necessary to make any decision. More importantly, they learn to respect the final decision that achieves the option that’s the best for everyone.

Through many exercises in campaigning and elections, kids cultivate a basic political awareness and develop the ability to sense group dynamics and undercurrents, as well as decision-making power. As they gain a greater understanding of linkages between self and others, they further develop emotional intelligence.

When it came to empathy, famed film critic Roger Ebert was quoted saying “I believe empathy is the most essential quality of civilization.” At Kidizens, we are privileged to observe hundreds of civilizations coming to life every year throughout our many programs. Time and time again, we see abundant evidence of this “essential quality” in the way the kids run their cities.

We believe that through many of its social and emotional learning tools, the Kidizens environment fosters the development of a child’s self-worth and their empowerment as an important member of the community, ‘a kidizen,’ allowing them to develop empathy towards others. With guidance and experience over time, exercising empathy becomes as intuitive for them as stacking one LEGO brick on top of another.

Get updates and learn from the best 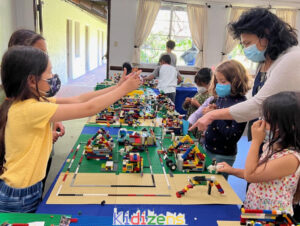 As summer comes to an end, your civic engagement and leadership through experiences in LEGO universe don’t have to! Kidizens *fall class registration* is now

At Kidizens, we are building responsible, future leaders, one brick, one project, one city at a time. Our mission is to cultivate creative, critical and civically responsible thinking that can be the foundational pillar of future learning in life.

Designed and Developed by Phailaav